Snow/sleet predicted for this weekend; let's be safer than last time

The weather forecast is calling for a rain, sleet and snow this weekend, which could make road conditions quite treacherous.  It's best to avoid traveling in icy conditions if you can. However, if you must travel, you'll want to call 511 or visit KanDrive to get the latest information about road conditions.

During the last winter storm in Kansas, 12 snowplows were struck by vehicles.   The video below has interviews with the snowplow drivers that were hit.  Let's not have that happen again. Please be safe on the roads this weekend.

Here's a look back at the 1968 Kansas Legislative Session. 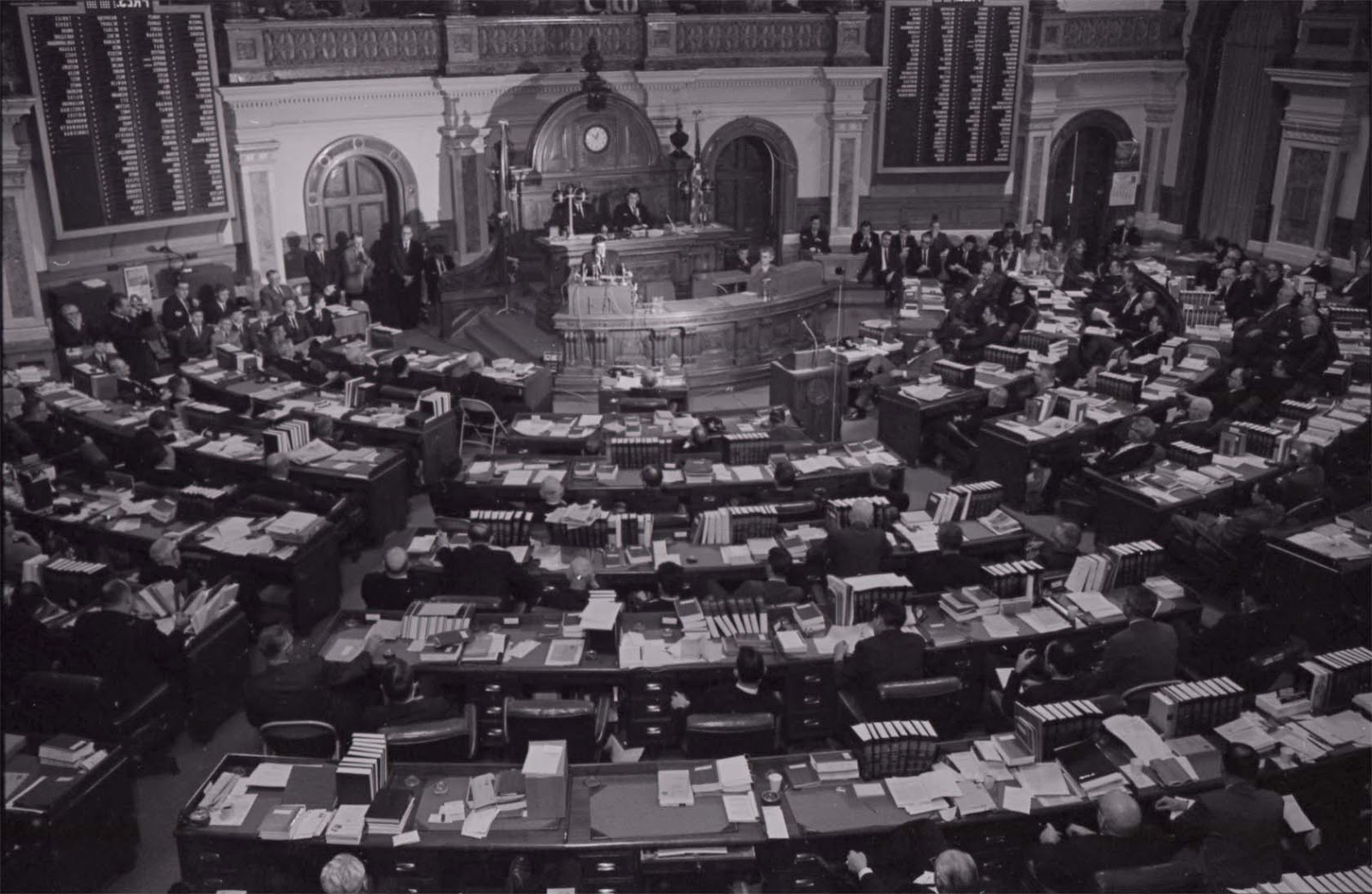 Should people be allowed to use cellphones during flight? 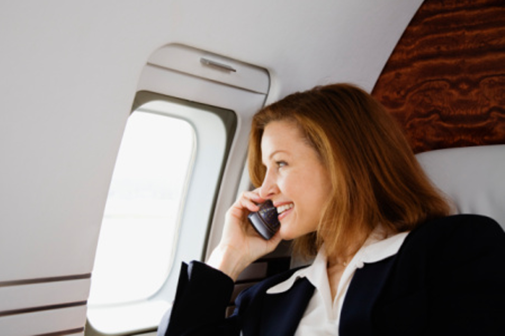 If you've ever been annoyed by people talking too loud on their cellphones, the U.S. DOT feels your pain and wants to do something about it.

In December, the Federal Communication Commission approved the first step in allowing passengers on airplanes to use cellphones in flight.  FCC Chairman Tom Wheeler called the ban "outdated" and "restrictive."

The current FCC ban was adopted in 1991 based on concern the calls planes might interfere with cellular networks on the ground, but technological advances have resolved those worries.  Thus, the FCC would like to see the restrictions lifted since their are no safety issues related to cellphone use in flight. And it has the authority to make that decision.

However, the DOT regulates aviation consumer issues. And it believes that lifting the ban may be "an unfair practice to consumers."

According to the DOT,  "Allowing voice calls on passenger aircraft may be harmful because people tend to talk louder on cellphones than when they're having face-to-face conversations. They are also likely to talk more and further increase the noise on a flight, as passengers would not be simply talking to the persons sitting next to them but can call whomever they like. While some planes may already have seat-back phones in place, we believe that most are rarely used and the department's concern is not about individual calls but rather the cumulative impact of allowing in-flight calls in close quarters."

The FCC points out that even if the ban is lifted it will be at the airlines discretion as to whether or not to allow it.  Delta Air Lines has already stated it will not allow calls.

In response to this public outcry, the DOT wants to know what you think about the potential rule change.  Click here to post a comment.  Comments must be received by March 26.

How long is your commute?

The average travel time to work in the United States is 25.4 minutes, according to the U.S. Census Bureau.  In Kansas, it's 19 minutes. How does that compare to your commute?  Is your commute longer than your neighbors?  If you're not sure, you can find out using this cool interactive map that WNYC put together. Using census data, the map gives the average commute time for every zip code in America. 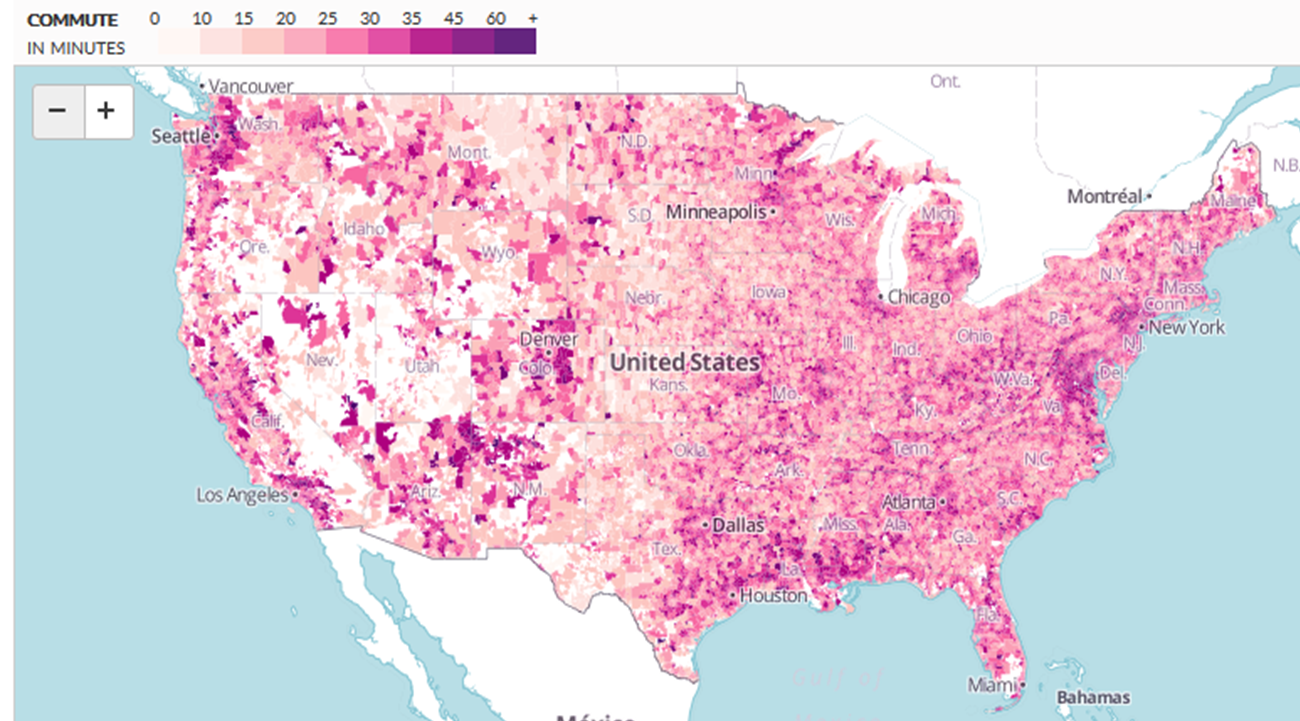 Here is the Wichita metro area up close. 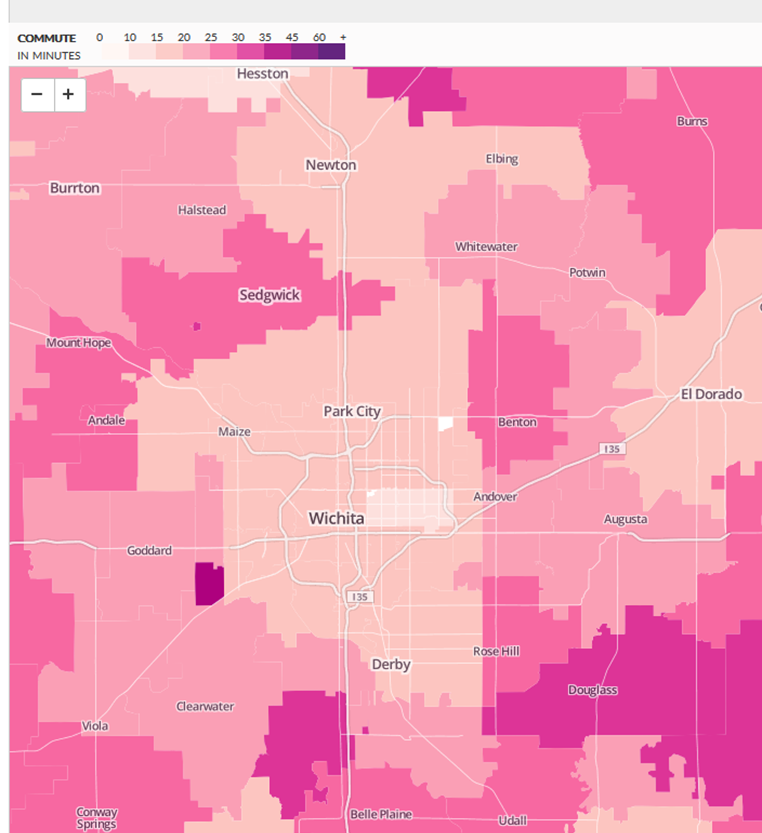 Here's is the map of the Kansas City metro. Click here to view the map and to find out what the average commute time is for your zip code.
Posted by Admin at 8:00 AM No comments:

Fuel trivia: It's a gas!

Forget the groundhog.  One of the most telling signs that warmer weather is on the way is higher gas prices.  Last week, the national average for a gallon of gasoline increased more than 5 cents to $3.36 per gallon.  Most people know that gas prices tend to rise in the summer and decrease in the winter.  But here are few things you may not know.

1. The average American uses 423 gallons of gas per year. 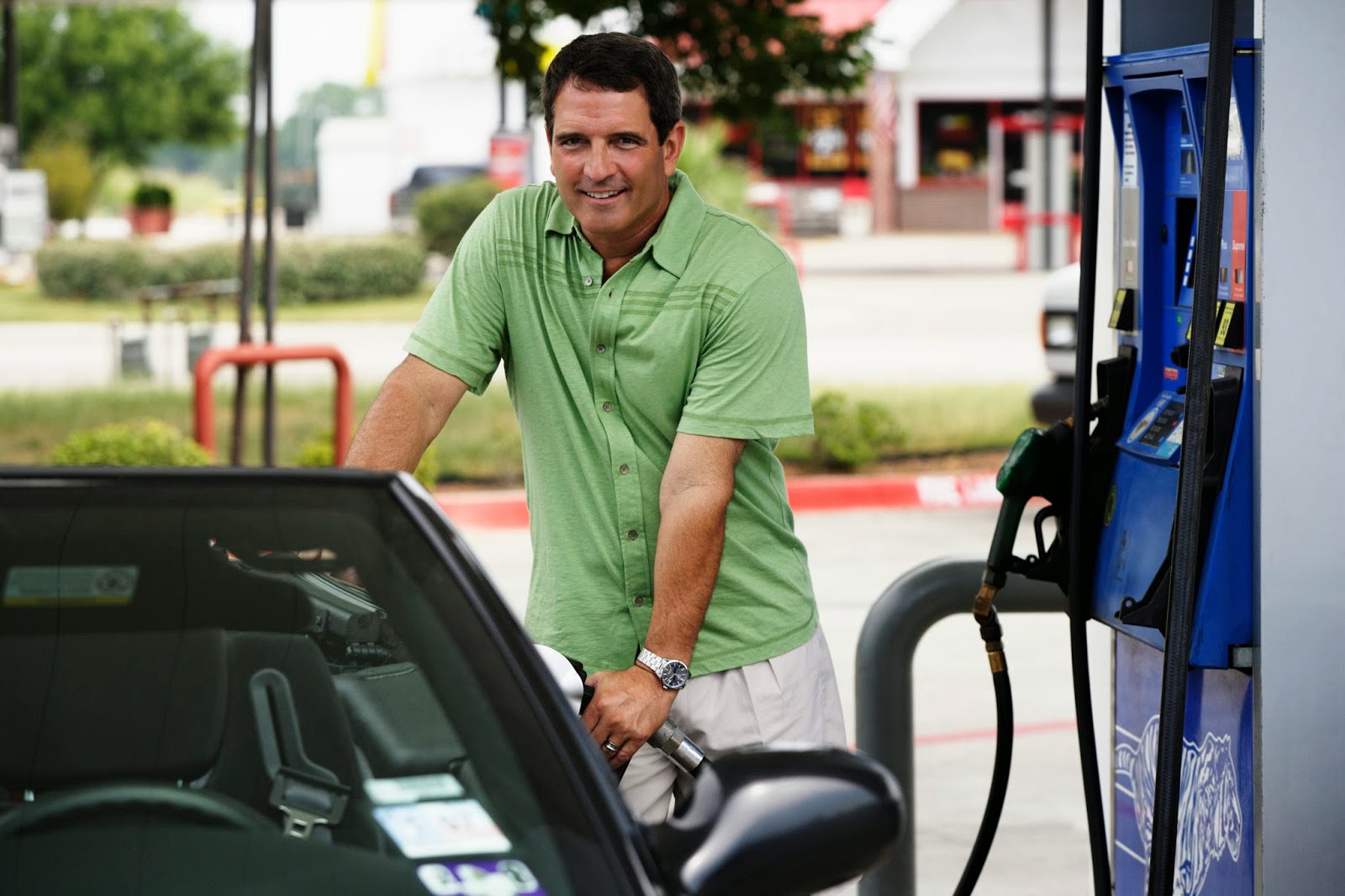 2.  North Dakota ranks first in the motor fuel consumption per capita at 577 gallons. 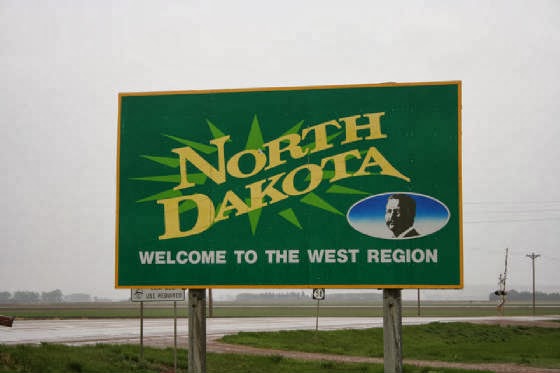 3.  Kansas ranks 29th at 438 gallons per capita.  Here’s how it compares to neighboring states. 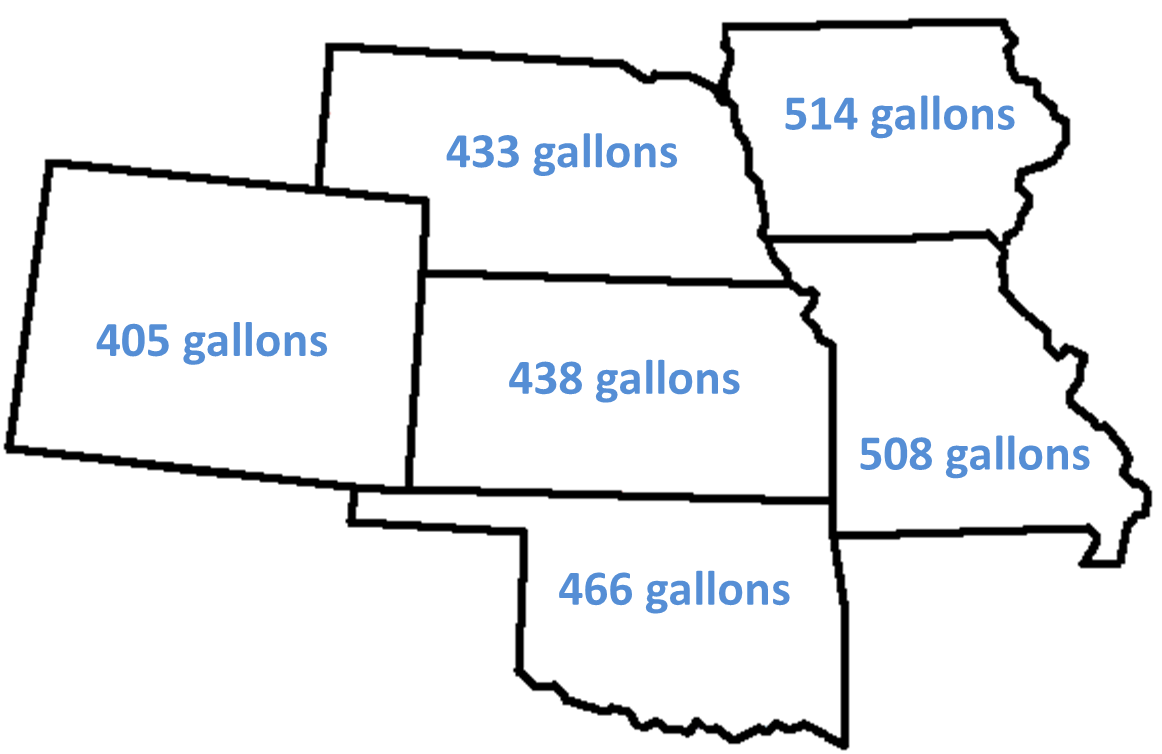 4.   Motor fuel consumption peaked in 2007 in the United States.  The reduction can largely be attributed to increased fuel efficiency in our vehicles. 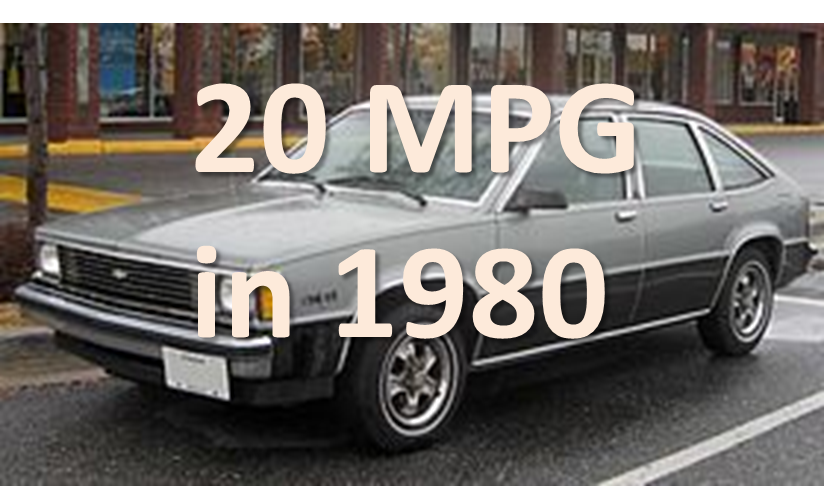 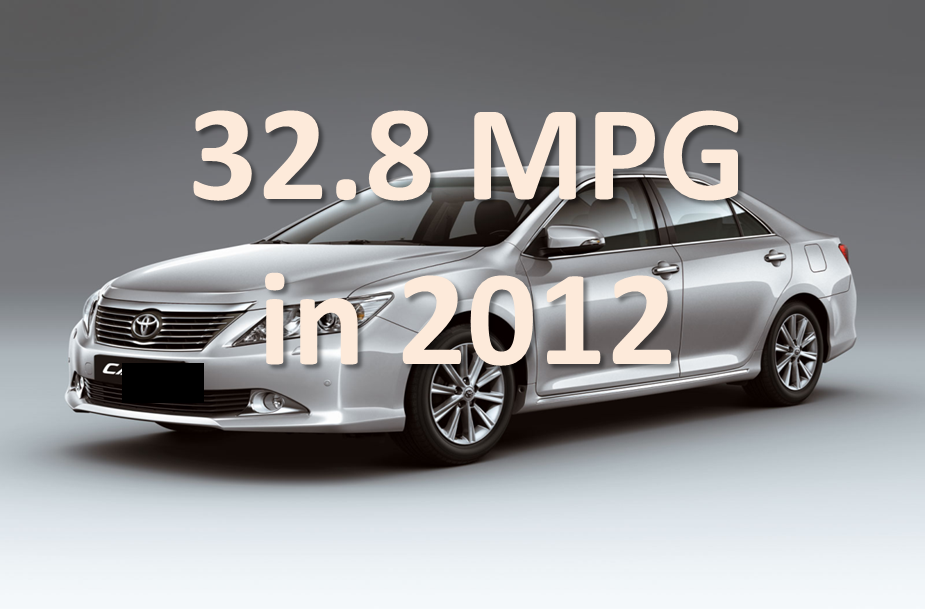 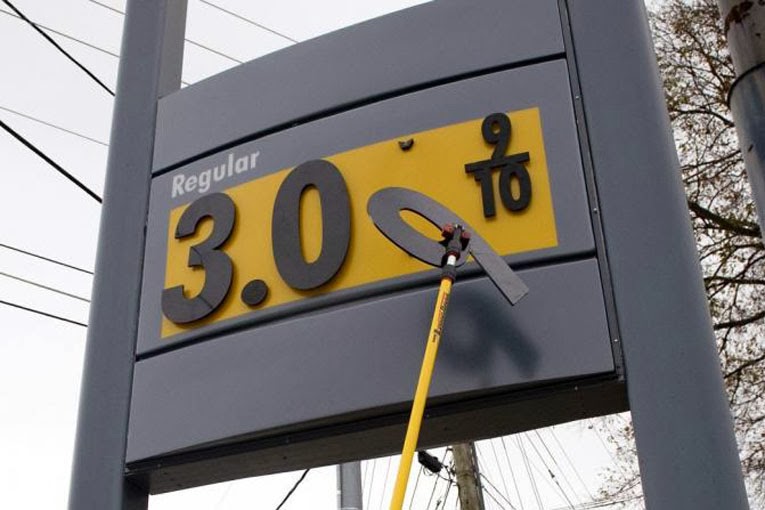 Sources: U.S. Department of Transportation & U.S. Energy Information Association.
Posted by Admin at 8:00 AM No comments:

Watch 10 hours of bridge construction --- in less than three minutes!

Sometimes when you drive past a construction project, it's hard tell if any progress has been made since yesterday's drive.  That wasn't the case if you were driving by Wichita's 13th Street Bridge on January 14.

On that day,  a large concrete pour for a bridge deck was completed at the I-235 and 13th Street project in west Wichita. Starting at 7 a.m., over ten hour of continuous pours from 94 concrete trucks resulted in 896 cubic yards of concrete being installed. A camera was set up at the site and captured this amazing video.

Here's a throwback to 1968.  Check out these brave construction workers walking a tightrope without a safety net.  They're working on an I-635 overpass in Kansas City.  We want to give a big thanks to highway workers past and present who put themselves at risk to build and to maintain our infrastructure.  (Note: The top photo is from November 1968 and the bottom is from July 1968.) 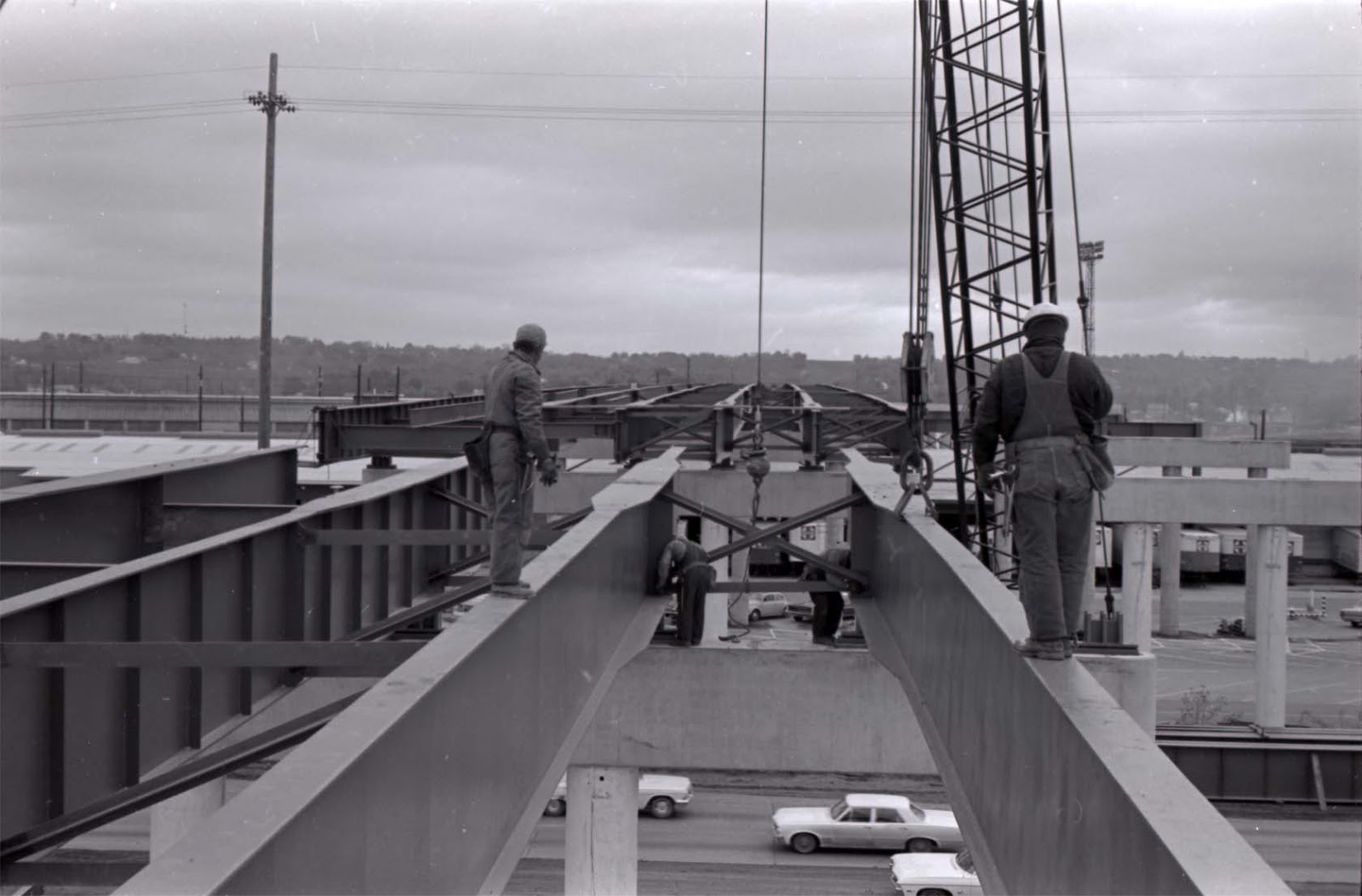 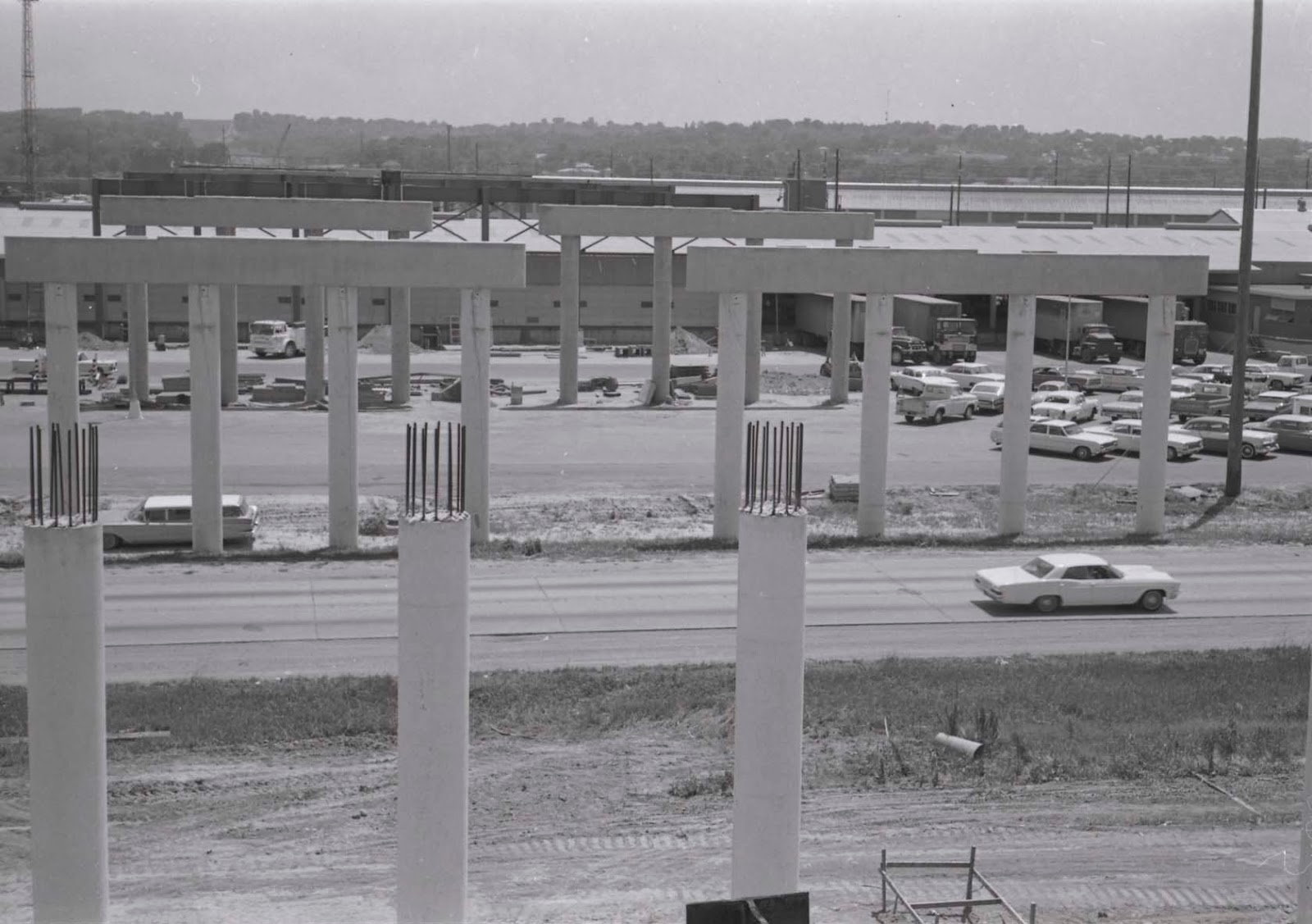 
In this week’s Wednesday’s Words we give a shout out to the new host of The Tonight Show, Jimmy Fallon.  Every Wednesday, Fallon tweets a funny hashtag and shares his favorite responses later that night on the show.  One of the best hashtags he’s ever done involved transportation.  He asked his followers to tweet out stories about the worst car they ever had.  Here are a few of the responses.  If you have a funny car story, please share it in the comment box below. 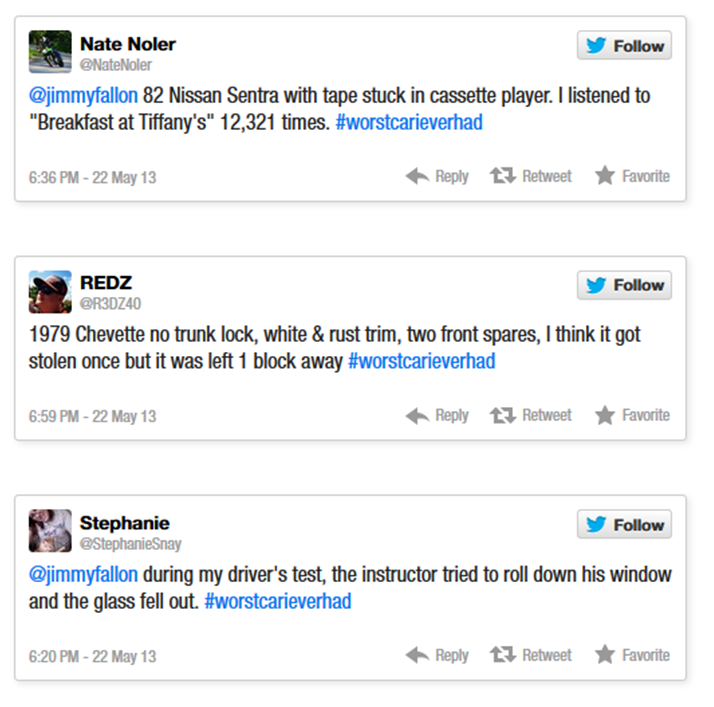 You can watch the entire segment about the worst cars below.

Technical Tuesday: The need for speed...limits

Today's blog will answer a question we received via social media recently about speed limits. 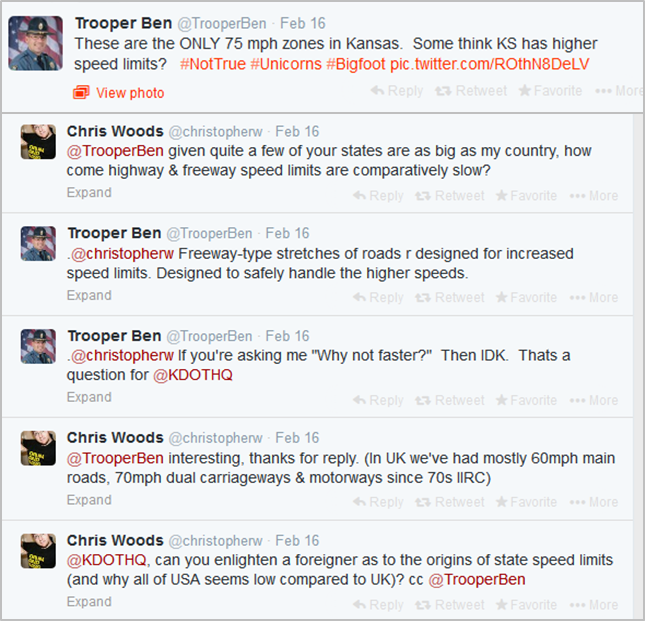 To answer this question, it’s best to start by looking at what the actual speed limits in Kansas are.  Check out the map below. 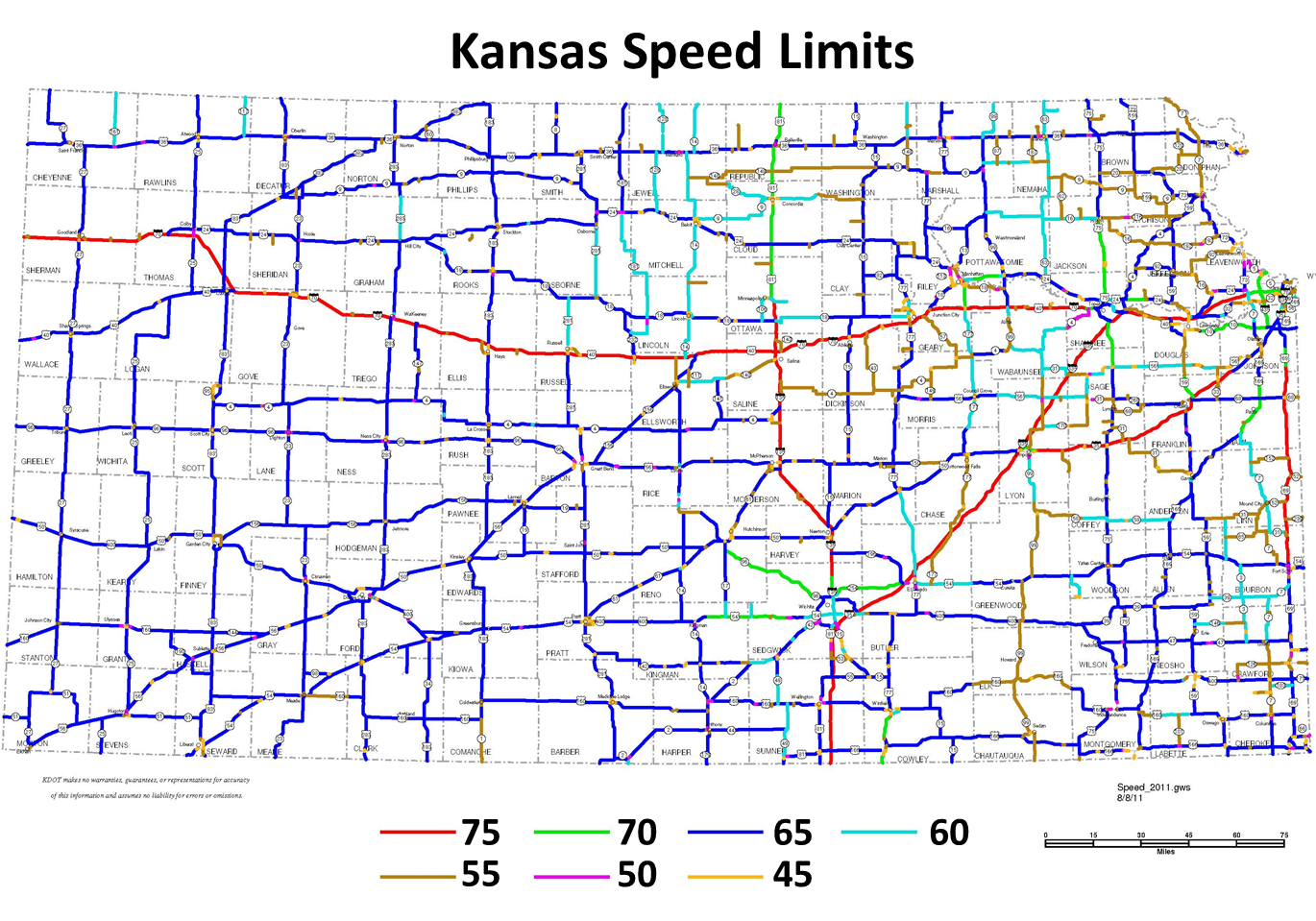 All four-lane highways or dual-carriageways in Kansas are 70 mph and above.  Our interstate routes (shown in red on the map) are 75 mph and above.  These routes have no cross traffic, which is why they are at the higher speed.

The majority of the two-lane highways in the state have 65 mph speed limits (shown in dark blue on map).  As you can see, there are some highways that have speed limits of 60 mph or below.  The reason for these lower speed limits can be attributed to a number factor such as a heavy traffic, roadway geometrics or high crash rates.

This wasn’t always the case.  In 1973 Congress enacted the National Speed Limit in an effort to conserve gasoline and it was set at 55 mph. In the 1980s it was increased to 65 mph on some roads, then in 1995 the law was repealed and each state was then allowed to choose their own speed limit. 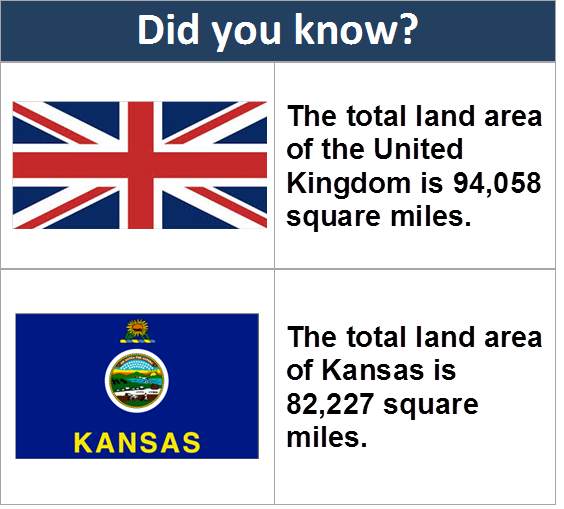 Until 2011, the speed limit on all major freeways was 70 mph in Kansas.  When the Kansas Legislature passed the new maximum speed limit of for separated, multi-lane highways, KDOT then made the choice of which highways would be increased to 75 mph. All of the routes that were chosen for the increased speed limits are freeways and have controlled access to and interchanges. Other factors that were considered for choosing those particular highways were whether the road was in a rural or urban area, the amount of traffic and the speed limit in the surrounding states. (Our neighbor to the west Colorado’s speed limit on I-70 is 75 mph, while our eastern neighbor Missouri is 70 mph.) Basically, at least in Kansas, the more populated the area, the lower the speed limit.

Below is map of the current maximum speed limit in each U.S. state.  As you can see a good portion of the country is at the same limit or higher than the United Kingdom, it just depends on where you are at while traveling in the U.S.

If you have any more questions about speed limits or another transportation-related issue, feel free to pose it in the comment box below or ask us on twitter @KDOTHQ.
Posted by Admin at 10:34 AM 3 comments:

The Parent App: Technology may reduce cell phone use while driving 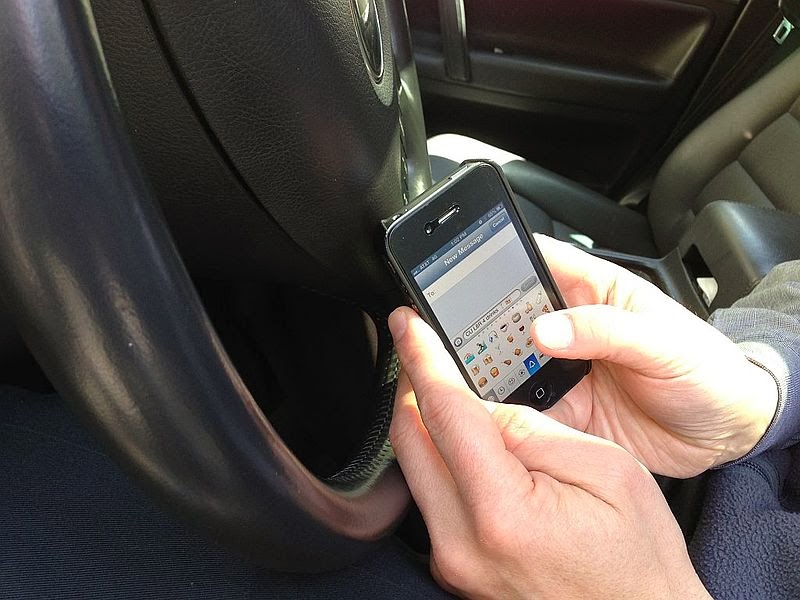 Every day in the United States, more than 9 people are killed and more than 1,060 people are injured in crashes that involve a distracted driver.  According to the National Highway Traffic Safety Administration, 21 percent of teen drivers involved in fatal crashes were distracted by cell phones.

For parents concerned about their teen texting and driving, technology may be the answer.  Several new apps offer the ability to monitor driving behavior or even eliminate cell phone usage while driving.

Auto insurer Esurance is allowing policyholders to install an in-car device (free of charge) in their teen’s car that in conjunction with the Esurance app installed on the teen’s phone, can limit the use of text, email, app usage and phone calls while driving—with the exception of 911.

For those with a different insurance provider, there are other options available.

The Canary app is installed on a teen’s phone and parents will be alerted whenever their teens are texting, tweeting, or using Facebook while driving.  It can also send an alert when teens are driving over the speed limit.

For parents wanting to know everything, the mSpy software app will “run in an invisible mode providing you with across-the board logging features so that you can remotely track all activity that takes place on the monitored phone.”

The MamaBear Child Tracker app alerts parents when their teen is speeding.

Rapid Protect offers a variety of safety tools. “If a user is driving over certain preset speed, their ability to send and receive a text message is blocked.”
Mobiflock  "allows parents to block the use of certain apps and even shut down cell-phone functionality remotely." Parents can also put mobile apps on a timetable for when they can be used.

Those recommending apps recommend that parents talk to their teens about the apps rather than simply installing them without prior warning—perhaps making it a condition of getting a smartphone.  And parents may want to consider using the apps themselves.

"Parents can be some of the worst offenders. My vision is that an entire family can use this,” said Jani Spede, chief executive of the Canary Project.  “It's a way for everyone to have more awareness. You measure behavior and then you can change it and improve it.”
Posted by Admin at 9:30 AM No comments: