In London, the bridges might just fall down. But it takes a little dynamite to remove an old Kansas bridge.

With about 26,000 bridges, Kansas ranks fourth nationally in the number of bridges.  Most of these bridges were built in the 1950s and 1960s.  And since the average lifespan is about 50 years that means many bridges were due to be replaced within the last decade.  Thus, many old bridges have had to be demolished to make way for a more modern bridge.  (Thanks to better materials and design practices, the new bridges are likely to last 100 years or more).  Our staff put together a video of the bridges and overpasses KDOT has had to demolish in recent years.  If you like explosions or orchestral music, this video is for you.

Email ThisBlogThis!Share to TwitterShare to FacebookShare to Pinterest
Labels: bridges

Five for Friday on the Freight Advisory Committee


On Tuesday, KDOT Secretary Mike King announced the members of the newly-formed Kansas Freight Advisory Committee. During the Kansas Transportation Summit last fall, citizens said that our agency needed to have a better understanding of the demands of expanding freight within Kansas.  This committee was assembled to help provide input on these issues.  We caught up with John Maddox, KDOT's freight and rail program manager, to learn more about this committee and freight issues in Kansas.


1. What will be the committee's areas of focus?
The Kansas Freight Advisory Committee Mission is to Advise, Assist and Advocate:

2. What do you consider to be some of the greatest challenges/issues with regards to freight?
The efficient movement of freight from origin to destination whether it be via motor carrier, rail, waterway, pipeline, air cargo or any combination of those modes.

4.  What was the selection criteria for committee members?
The members of the Freight Advisory Committee were selected based on their experience and knowledge pertaining to freight transportation logistics.  The committee is composed of a diverse group of individuals representing transportation companies, shippers, industry organizations, state governmental agencies, local planning organizations and industry/manufacturing.

5. When is the first meeting?
April 2nd in Topeka.

Below is a list of the Freight Advisory Committee members. 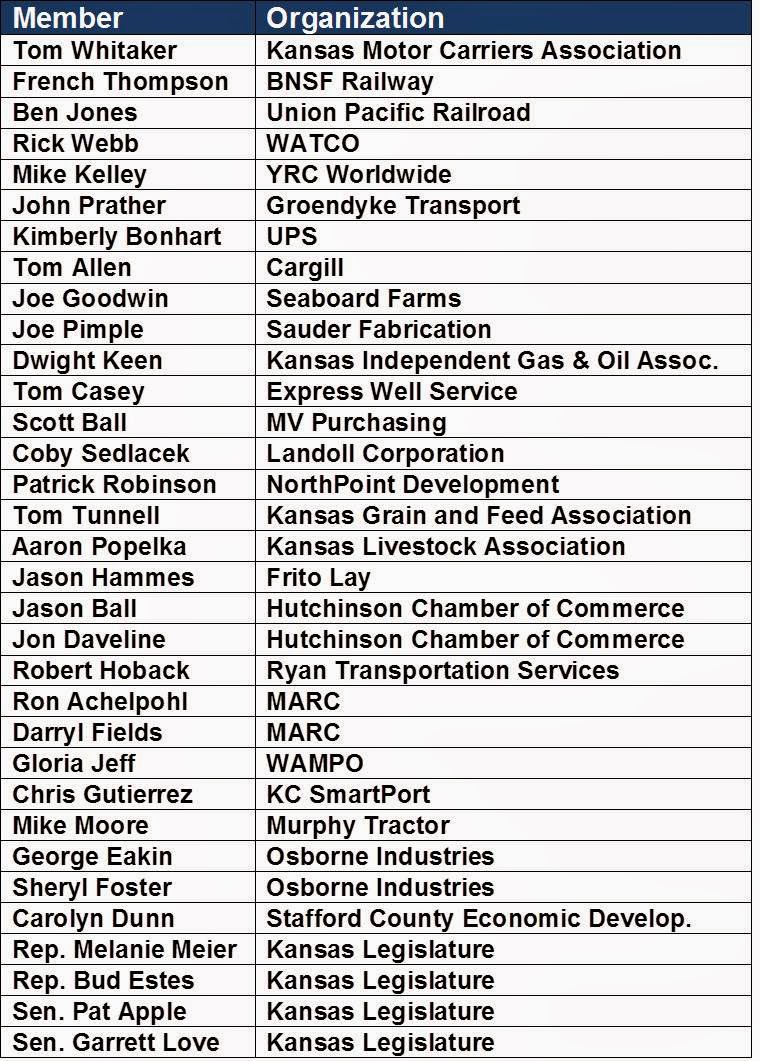 Today we venture back to 1972 and the construction in Overland Park. As you can see, it was pretty rural back then. 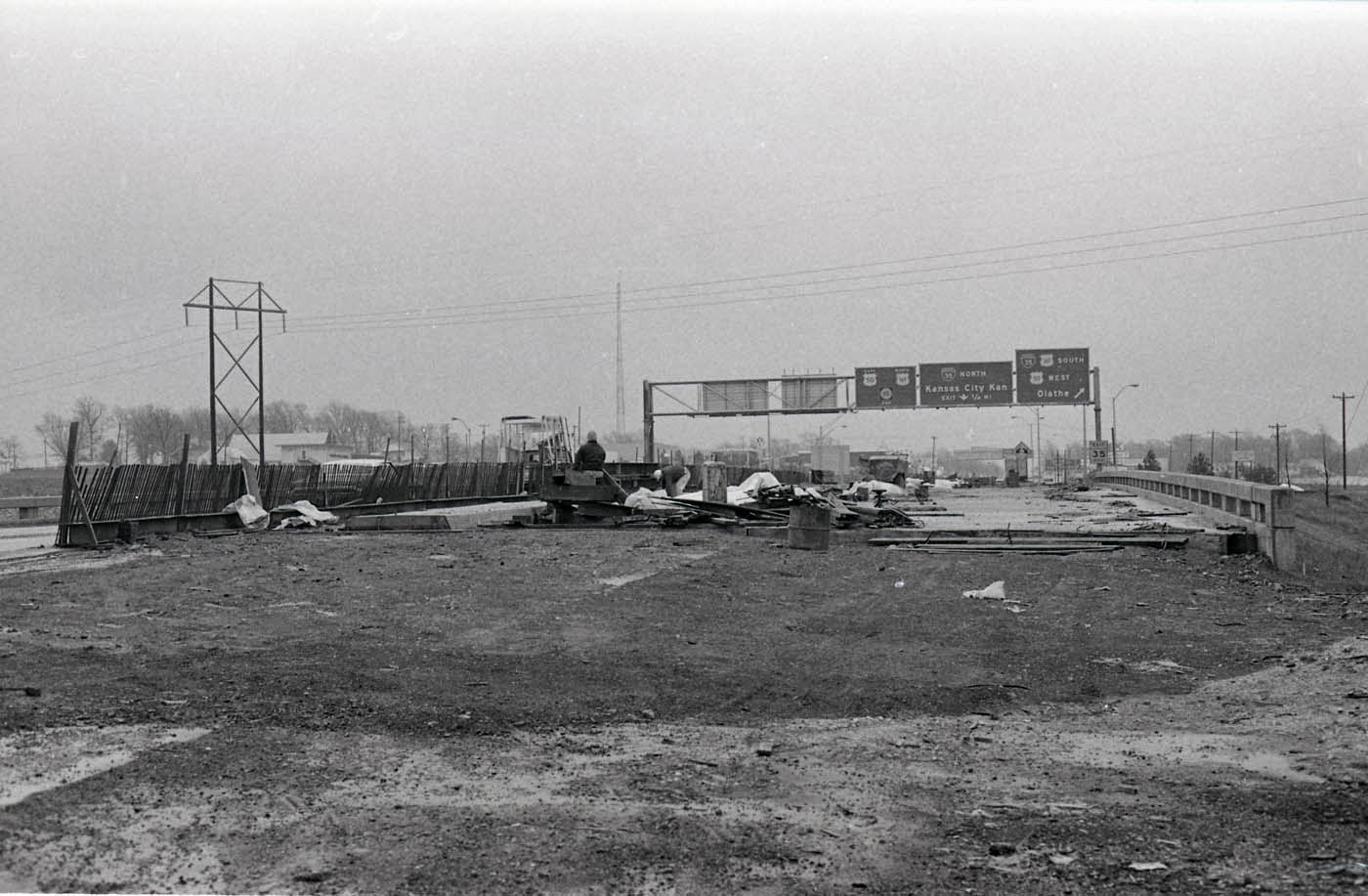 Here is a view of how that same area looks today. 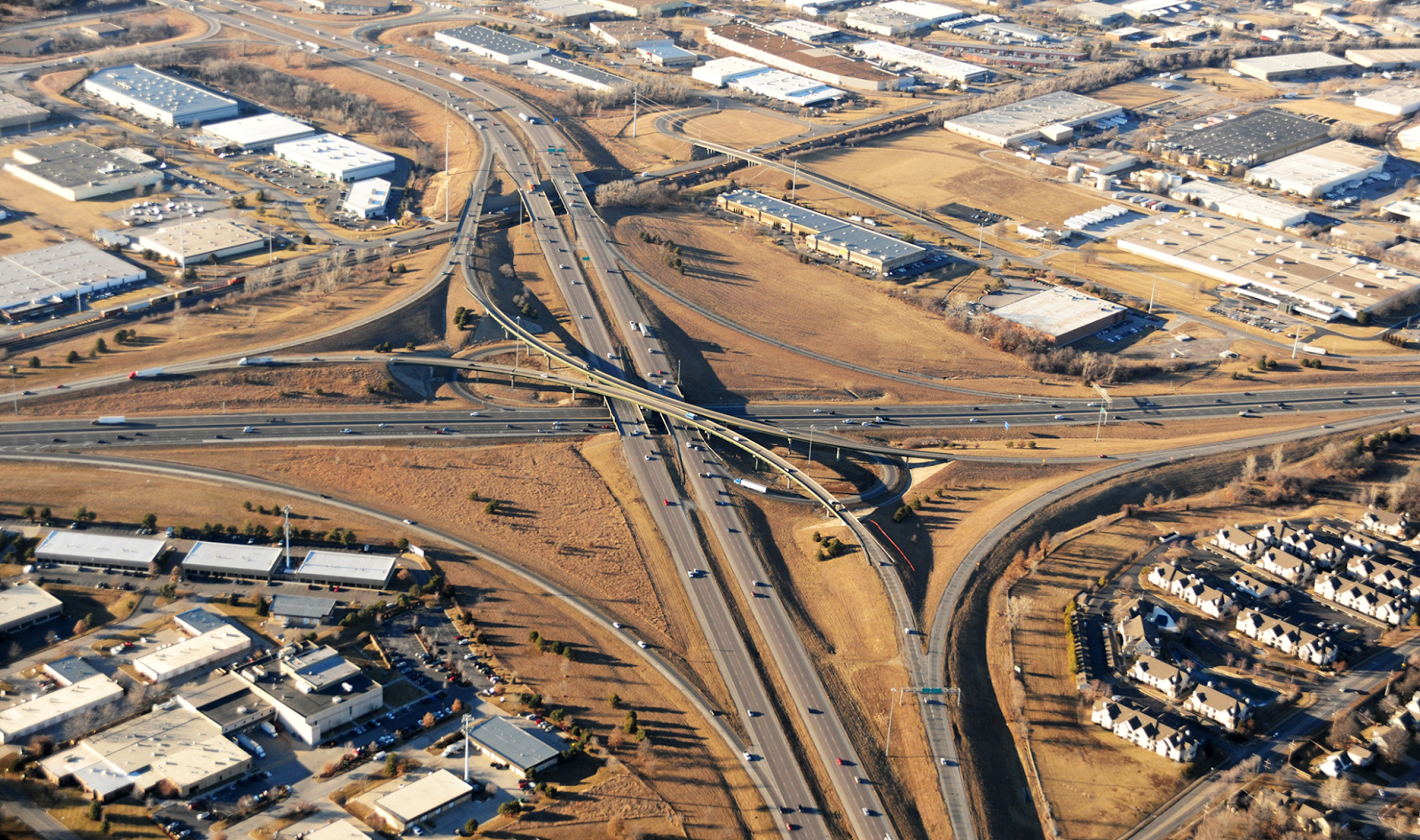 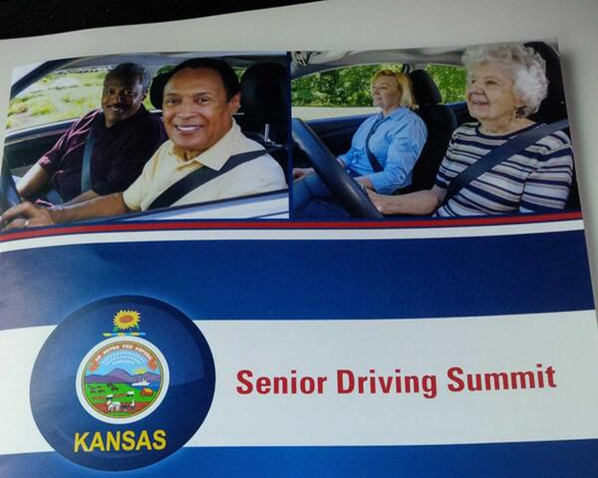 “Senior drivers are our safest drivers. Because of their vast experience as drivers, they tend not to engage in dangerous behaviors, such as speeding, drinking and driving, they tend to self-regulate their driving by not driving as much at night or in heavy traffic."

"However, they are over-represented in fatal crashes because of their fragility. Issues with vision, reaction time, and understanding other mind and body changes become more of an issue as we age. The problem is that we all age differently. On average, men and women outlive their ability to drive by six to ten years, respectively, so it is increasingly important that we take a new view of planning for driving retirement, similar to the way we plan financially for retirement.”

These remarks were made during the March 18 Kansas Senior Driver Summit in Topeka.  The event was sponsored by AAA Allied Group and KDOT.
Posted by Admin at 8:00 AM No comments: 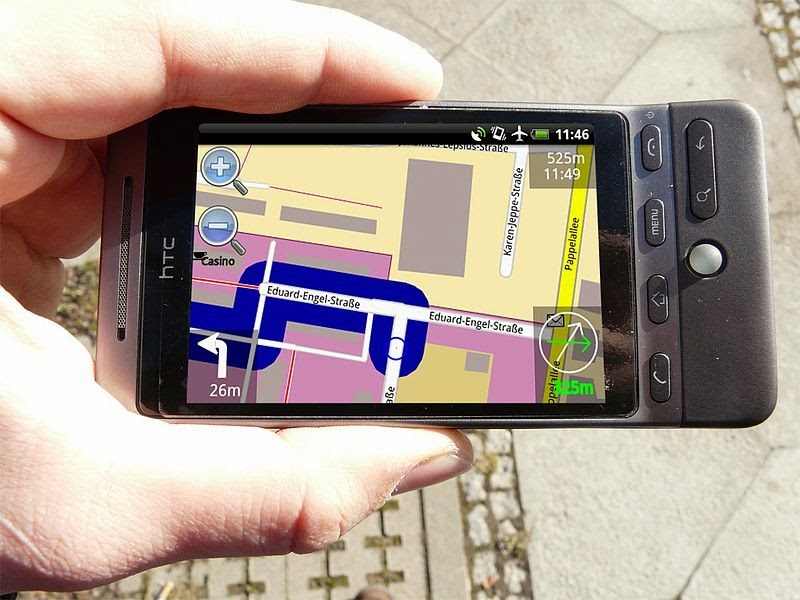 Forbes recently ranked the 25 fastest growing technology companies for 2013.  One of them was transportation related.  Can you guess what company it was?

Trimble Navigation, a company that provides GPS, laser rangefinders, and inertial navigation systems landed at number 25 on the list.  Trimble Navigation is most popular in the fields of construction, surveying, agriculture and fleet management.

This may not be that surprising given the growth of GPS devices both for commercial and personal use.  According to J.D. Power, the number of drivers using GPS on their mobile devices increased from 37 percent to 47 percent from 2011 to 2012.   And there are more apps being created to enhance the navigation options.  For example, the app Waze provides routes to help drivers avoid traffic.

How often do you use a GPS device?  Let us know in the comment box below.

It was a rough weekend for Kansas basketball teams and thus, it really hurt our bracket that was based on teams that come from states with the best highways.  It started off okay with us correctly picking 53 percent of the round of 64.  However, the third round losses of Wichita State, Kansas and North Dakota State eliminated all of our Final Four teams. (Coastal Carolina our other Final Four picked lost its first game).  And we only correctly picked two teams (Florida and Arizona) in the Sweet 16.  Ouch.  Perhaps, next year we should fill out our brackets using aviation, rail or transit metrics-- surely one of those would do better.

On Tuesday's blog, we showed you what an NCAA bracket would look like if you selected winners based on which teams come from states with the best highways.  We had a nice response from our readers about this blog and they asked us to keep track of how the bracket performed. And we always like to do what our readers ask.   Yesterday's results were not kind to us as we only accurately predicted six out of 16 games for a success rate of 37 percent.  Yikes. However, all hope is not lost, our predicted champion North Dakota State saved our bracket by winning in overtime-- so we still have a chance to finish strong.

You can view the complete bracket and our selection methodology here.
Posted by Admin at 10:17 AM No comments: 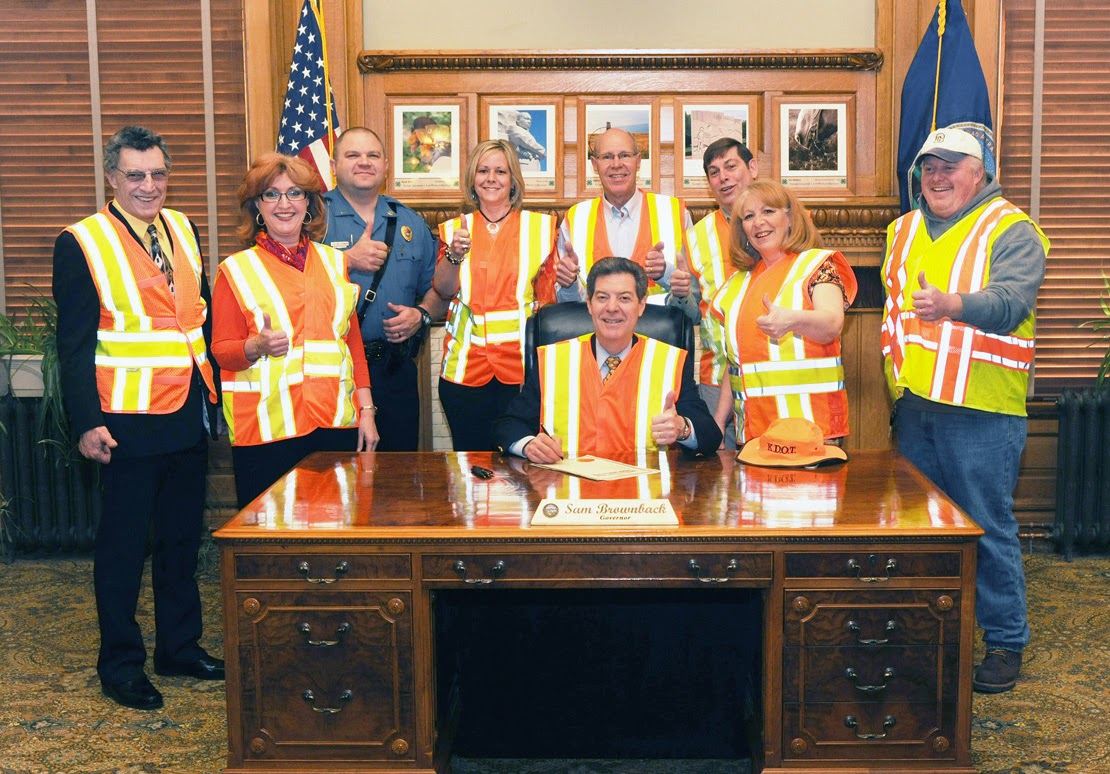 
On Thursday, Governor Sam Brownback signed a proclamation declaring April 7-11 Work Zone Awareness Week. Work zone safety is important all year long, but this is an effort to raise awareness to the dangers associated with highway construction work zones and to educate people on what they can do to improve safety.

We are encouraging everyone to support this effort by wearing orange.  Please send us your  "Go Orange"  photos.  You can tweet them to us by using the hashtag #goorangeks or email them to publicinfo@ksdot.org.  Check out our Flickr page here to see all the photos we've received.
Posted by Admin at 8:00 AM No comments:


In honor of St. Patrick's Day earlier this week, today's throwback photo is from the 1981 St. Patrick's Day Parade in Topeka.  On  that day, KDOT's own Hugh Rice carried the Irish Flag.  Rice, a native of Ireland, was known around the office as the "Fighting Irishman."  He worked in KDOT's Fiscal Management office for 35 years-- retiring in 1981 about two weeks after this parade. 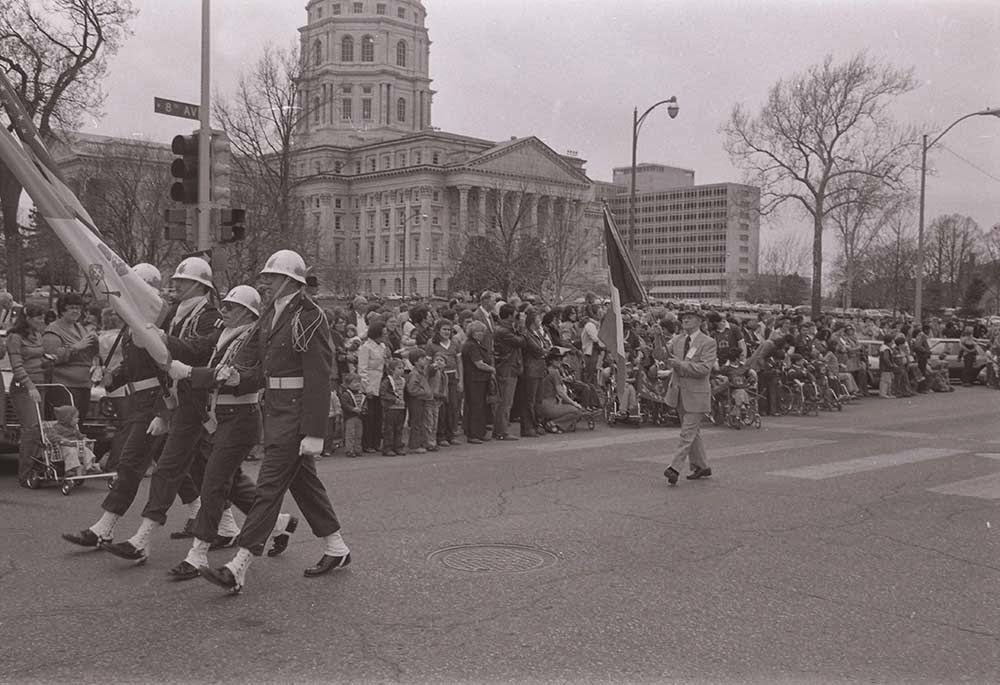 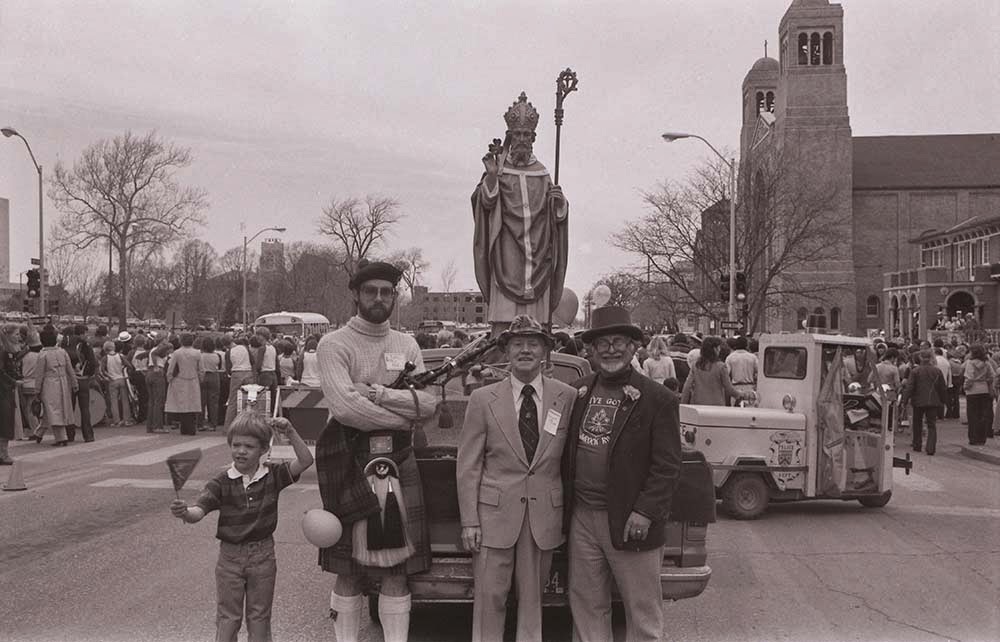 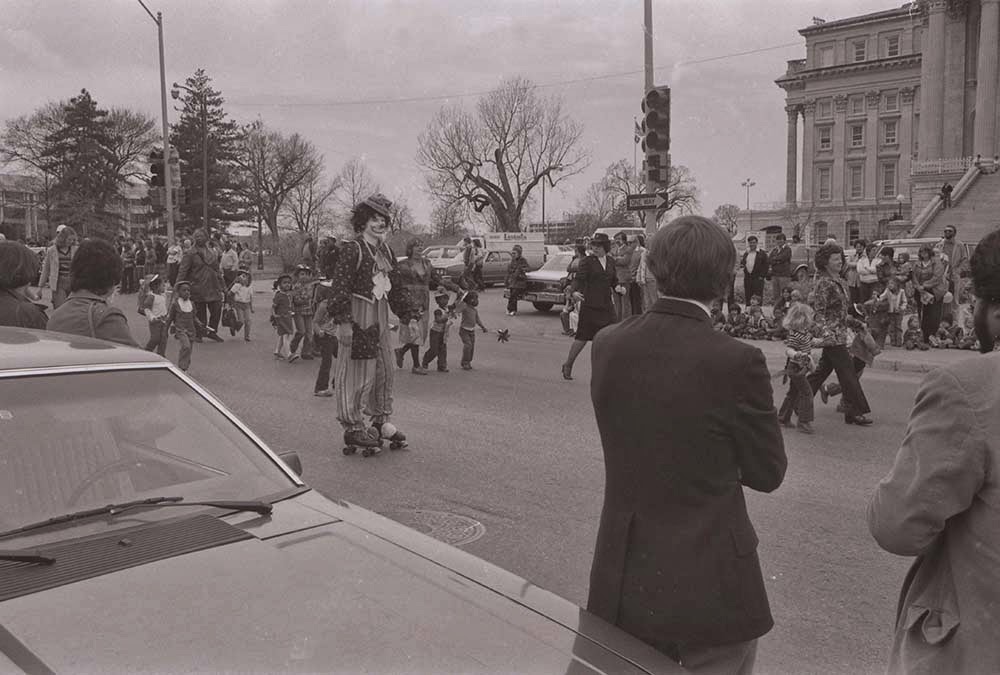 "Based on current spending and revenue trends, the U.S. Department of Transportation estimates that the Highway Account of the Highway Trust Fund will encounter a shortfall before the end of fiscal year (FY) 2014.
-          U.S. DOT 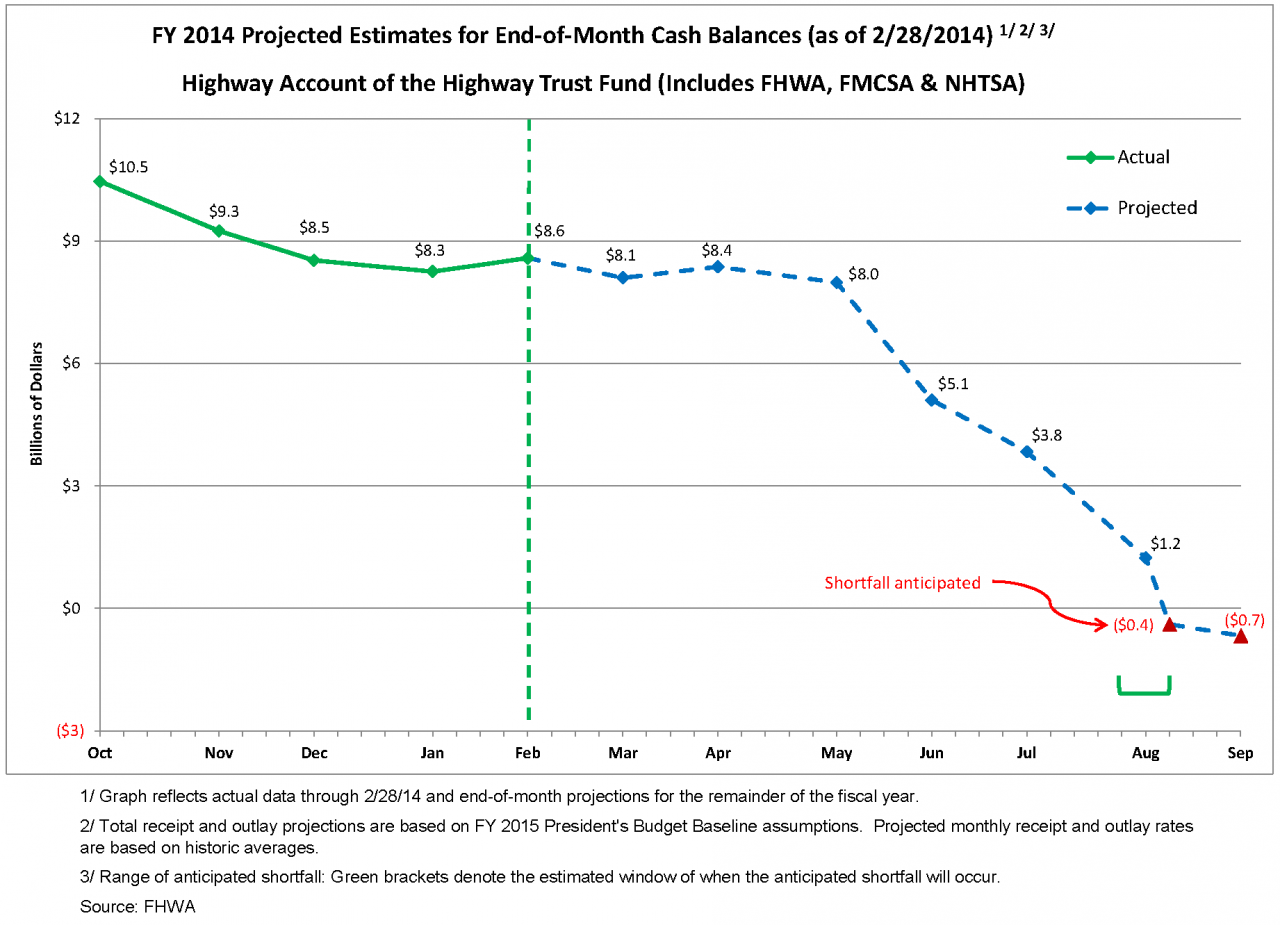 The great thing about NCAA bracket contests is that a college basketball expert's bracket can often get bested by someone who picked winners based on which mascots would win in a fight.   There is no surefire way to be successful and so sometimes it's more fun to get creative with your selection criteria. That got us thinking what a bracket might look like if you filled it out by picking teams that come from states with the best highways. And thus, the idea for a highway-performance inspired bracket was born.

Our methodology:
In July, the Reason Foundation released its Annual Report on the Performance of State Highway Systems. The report measures the condition and cost-effectiveness of state-owned roads in 11 categories, including pavement condition, deficient bridges, spending per mile and more. Using these factors, the report ranks all 50 states and so we used those rankings to put all the teams in order.    For example, North Dakota was the top-ranked state in highway performance, therefore North Dakota State was the number one team in our rankings.  For the states that had more than one team competing, we then went by their NCAA seeds to determine the order. We then picked winners solely by which was higher on our list.  Here is the complete bracket using this methodology. 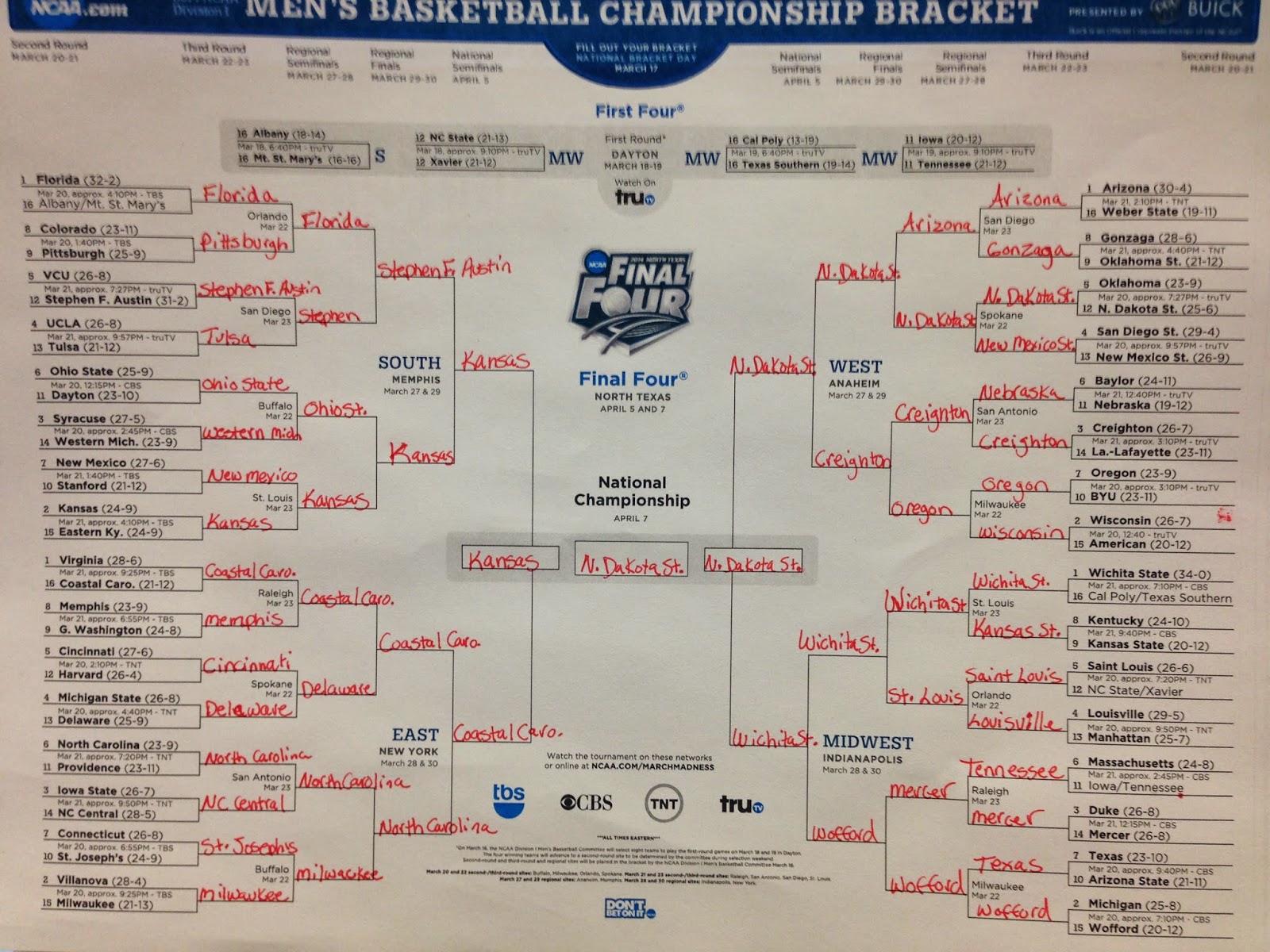 Kansas Rules & Other Observations
Turns out, Kansas is really good at basketball and highway performance. You might say that when our players take it to the rack, they're driving through the well-paved lane.  On second thought, don't say that.  Kansas is number two on Reason's highway performance list.  And since top-listed North Dakota only has only one team competing, that meant all three Kansas teams would be number 1 seeds on our list-- or make up the top four teams.  As a result, Kansas and Wichita State make it to the Final Four in our bracket.  Top-ranked North Dakota beats Wichita State in the semi-finals and then bests Kansas in the championship game.

Since,  K-State had to face off against Wichita State, who is ranked higher on our list, it was unable to make it to the Final Four.  And because none of our top teams were put in the East Region, Coastal Carolina makes a Cinderella-run to the Final Four-- this would be quite a feet considering no 16-seeded team has never even beaten a 1-seed.

The Complete List a.k.a Highway Seeding
Here is how the teams would be seeded using our methodology.  The team's actual seed is in parenthesis for your reference.  Teams that received the same seed are highlighted.

Will you use transportation as a factor in your bracket ?  Let us know in the comment box below.