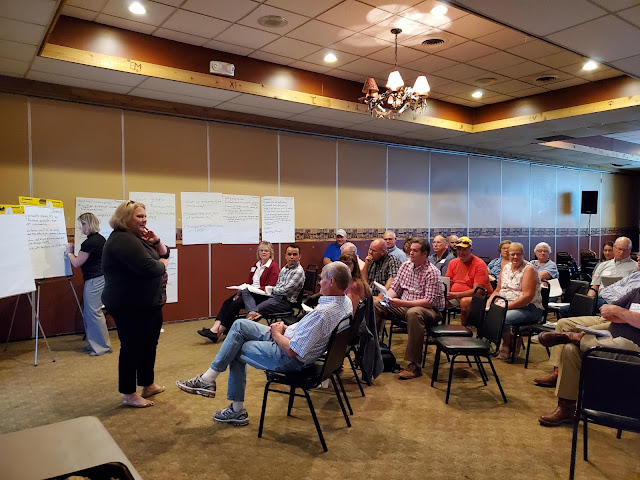 A brighter future requires safer and better connections for people and freight.

That was the key takeaway from the Southwest region’s Local Consult Round 1:  Visioning Transportation Futures meeting on Wednesday in Dodge City.

About 155 Southwest Kansans participated in a scenario planning exercise and provided input on how transportation investments could best serve their communities now and in the future.  Participants strongly advocated for highway safety improvements and were open to a variety of practical strategies for doing so such as adding shoulders, passing lanes or freeways.  The most important thing was to make some improvements in the short-term while allowing greater improvements in the future, they said.  Due to the rural nature of southwest Kansas, residents generally must make longer trips, which can lead to more distracted driving, they said.

“You’re out in God’s Country and you’re distracted because you’re looking at other things – and all of sudden you’re in an intersection.”
-Tina Pendergraft, Director of Nursing, Trauma Coordinator & Emergency Preparedness Officer at Satanta District Hospital

Southwest Kansans were concerned about creating better connections to regional and area hubs – as well as other regions across the state.  This is important for economic development, they noted.  However, the need for better connections went beyond roads.  As they discussed new technologies, participants noted that currently some areas of Southwest Kansas are unable to receive same-day deliveries. Utilizing drone deliveries for small freight could potentially fill this service gap in the future, they said.  The technology discussion extended to broadband where participants noted that some families subscribe to multiple internet providers because they can’t access reliable service.

As they worked through three distinct future scenarios, participants stressed the importance of making investments that could create a ripple effect throughout the region.  For example, Katie Eisenhour, executive director of the Scott County Development Committee Inc., spoke about how her community would look to build upon the growth in the Garden City and Dodge City areas.  She noted there are vibrant areas in southwest Kansas and communities should find ways to collaborate to create more opportunities across the region.

“We win when we win together.”
- Katie Eisenhour, Executive Director for Scott County Development Committee Inc.

Wednesday’s discussions served as the penultimate for this round of KDOT local consult meetings.  To date, more than 1,000 Kansans have participated in these input sessions. And, the Southwest meeting held the distinction of having the youngest participant yet – a three-year-old attendee, who was much welcomed and was a helpful reminder that transportation investments should serve us today and well into the future.

In their discussions about how future changes could impact southwest Kansas, participants were particularly focused on how the agriculture industry may shift. As one group noted, the future may be as much about finished products as it is raw commodities, and we need to think about the transportation implications of that change.  Regardless, participants noted that agriculture would continue to be a staple of the region’s economy and we must continue to find ways to serve it.

“Kansans will still need to eat no matter where they live. My vision is for southwest Kansas to continue to be an agricultural hub and we need safe, good highways to do that.”
-        Ada Linenbroker, Seward County Commissioner

Ada Linenbroker, Seward County Commissioner, stated that to be successful, Kansas would need to find the balance between serving immediate needs while also adopting long-term strategies.  Participants referenced safety improvements and highway maintenance and preservation as examples of immediate needs that must be met.  They pointed out that infrastructure is deteriorating faster than it used to, which is causing preservation needs to increase.

In any future scenario, participants noted that having enough revenue and ensuring it is distributed strategically across the state would be a challenge.  They noted that technological advancements may be a way to combat this.