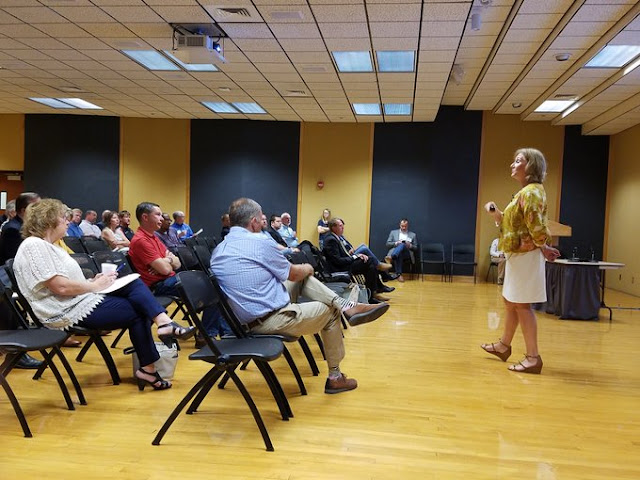 We want to be in charge of our future.

The pace of change is accelerating, especially in the agriculture industry, and we must be mindful of these shifts in order to make transportation investments that will serve us well now and in the future.  That was the key message delivered at the Northwest region’s Local Consult Round 1:  Visioning Transportation Futures meeting on Thursday in Hays.

This session held the distinction of being the last of eight local consult meetings across the state. With the 75 attendees at Thursday’s meeting, it brings the combined total to approximately 1,100 Kansans who provided input to KDOT this August.  It was quite fitting that the closing message of the session included a call for Kansans to keep their eyes open for the changes ahead and work together to move our state forward.

Attendees participated in a scenario planning exercise and provided input on how transportation investments could best serve their communities in the future. Like the previous meetings, participants noted the role that transportation improvements can play in increasing safety and generating more economic opportunities.  And they also demonstrated a similar practical approach offered in previous regions for how to stretch limited transportation dollars further.  Phil Smith-Hanes, the Ellis County administrator, talked about the need to find ways to accommodate oversized and superload trucks as they approach the busy retail and service district of Vine Street in Hays. Residents would prefer a complete bypass, he said, but even a downscaled intersection improvement on the city’s northwest side would be helpful.

As they worked through three distinct future scenarios, some participants imagined a future where rail travel could help move people - including seniors - and agricultural products - such as cattle - around the region. If one Kansas producer could move 1,000 cattle at a time from northwest Kansas feed yards to southwest Kansas processing plants by rail instead of truck, “that would be amazing,” a participant said.

In the more immediate future, however, participants said the current infrastructure needs require the region to rely heavily on good, safe roads. Technology could change that, they agreed, but the roads will likely need to remain a critical piece of the system.

Overheard at the meeting:
“You can have all the technology you want, but you’ll still need roads.”

In addition to thinking about how to move agriculture products around and out of the region, it will continue to be important to think about moving workers from home to jobs —especially in rural areas and during times of low unemployment, one group said.

Participants also stressed the value of both regional hubs and the “spokes” that support those regions.  Having good connections to the amenities throughout the region is important for attracting and retaining people, participants said. For example, one participant mentioned a Phillipsburg resident who works out at a gym in Hays.  The man doesn’t mind traveling 120 miles round trip because it’s a shorter and much easier commute than he had when he worked in a city.  Participants also mentioned that these connections should be multimodal and noted the importance of regional transit.

Overheard at the meeting:
“We can’t be resilient if we’re playing catch-up all the time.”

There was significant discussion about stabilizing revenue sources for both current and future needs.  Participants noted that there were increasing extreme weather events like flooding that warrant keeping our infrastructure well maintained especially as it relates to drainage.  They noted that it’s more costly to recover than properly prepare.  They also acknowledged that it may be important to consider alternative sources of revenue as technology changes.  For example, motor fuel taxes are declining as more vehicles become electric, and that decline in revenue will worsen.  One group discussed the need to consider user fees that are tailored to the type of facility travelers are using.

Similar to previous meeting, participants discussed the importance of making infrastructure improvements to improve safety.  For example, Ross Carter, a county road supervisor for Sheridan County who has a 31-year career as a fire chief in and near Hoxie, said he was particularly concerned about US-23 that connects Selden, Hoxie and I-70.  In his career, he said, he has attended to 22 fatality accidents on that road. The numbers and severities of crashes continue to increase as passenger vehicles share the road with an increasing number of trucks serving the area’s agriculture industry.

In a discussion that called for attendees to envision what Kansas will be like in 2045, it was very fitting that a college student took the opportunity to share his concerns. Thomas Nelson, a senior at Fort Hays State University from Hutchinson who is studying international business and economics, spoke in favor of the project known as the Northwest Passage that would connect Wichita and Hutchinson to Sterling, Great Bend and Hays and other communities in central and western Kansas.

Regardless of the scenario, participants discussed the value of rural and urban communities working together.  They noted that the state’s overall success is tied to large and small communities supporting each other.

The wrap up discussion included a call for holistic connections – meaning a multimodal system that works seamless and allows regional hubs and spokes to thrive.  KDOT Secretary Julie Lorenz concluded the discussion by thanking everyone across the state for participating in these discussions.   It was clear from all these discussions, that Kansas are truly looking forward to building a future that works for all of us.