Grateful for my life

By Nancy Fleeker Daniels
Almost two years ago I was in my pickup truck waiting at a stop sign for my turn to cross a well-traveled road that does not have stop signs. There was no oncoming traffic in sight from my left or right, and the next driver opposite me signaling to turn left appeared to be waiting for me to take my turn. 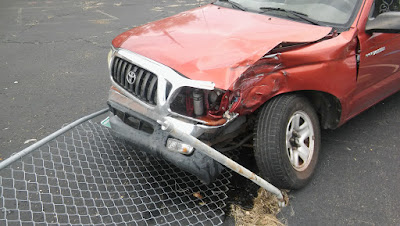 After I entered the intersection, the opposite driver suddenly pulled forward, turning his wheels left front of me. I braked, and the other driver also stopped. Unfortunately, another driver in a pickup truck with a trailer came over a hill, saw me in the intersection, but (by his own admission) was speeding and couldn’t stop. He slammed into my truck turning it around and sent me careening out of control.
I remember putting my right foot on the brake three times and having it knocked off by the force of the truck. At the same time, I was trying to steer my vehicle into the correct lane while the truck kept jerking back into the lane that now had oncoming traffic. I finally succeeded in getting off the road.  My truck crashed through a chain link fence and came to a stop.
The movement of the truck was so violent, that it broke my foot by whipping my leg sharply. The seat belt broke my collar bone. Those were the injuries that were immediately apparent.
Two months later I began to have neurological issues. I lost my balance while leading students in the hallway at work. My writing became difficult to read and I misspelled my own name three times in one day. I typed an email and when I finished, the computer screen showed an email with nothing but gibberish.
My husband took me to the ER where a cat scan revealed large blood clots caused by two subdural hematomas – one on either side of my brain. The neurosurgeon said the movement of the truck caused my brain to repeatedly move back and forth, hitting against either side of my skull. I had emergency surgery that involved cutting four incisions in my scalp so that holes could be drilled in skull. I was extremely fortunate. They were able to drain the majority of the blood through tubes. Appropriately, I was released three days later on Thanksgiving Day.
I was not allowed to drive or work for more than two months. As a substitute teacher I don’t get paid unless I work. My insurance only paid three-fourths of my lost wages.
I fight being bitter towards the driver who was inattentive and driving too fast.  He had no injuries. He also had no insurance, so I had to pay for my new vehicle.
Physically, I’m not the same. I often experience sudden, complete exhaustion requiring immediate sleep – sometimes for hours. My foot healed, but I experience great pain if I am on it too much. I use a cane most teaching days. I get headaches several times a week near one of the holes in my skull. I still have the four holes in my skull and my head is extremely tender.
Now that I’ve listed all my woes, I want to be clear that I am grateful for my life. I am glad I made a choice long ago to always wear my seat belt. Had I not been wearing my seat belt, the violent movement of the truck would probably have ejected me and my story might have ended very differently.


Nancy Fleeker Daniels is retired from the Kansas Department of Transportation in Topeka.