By Lisa Rasor
A few years ago, I started keeping my mountain bike in my office in downtown Topeka so I could bike the Shunga and Landon trails after work. I liked to do 10 to 15 miles before heading home to Lawrence for the night. The Topeka trails are great, with lots of curves and no real hills; perfect for an easy after-work ride. (Lawrence has nice trails too, but you have to cross roadways and look out for cars, so they’re not as fun.)
But a fun, easy route doesn’t mean you can let your attention wander. I bicycle regularly on paved trails, county roads and state highways; I know riding takes caution and concentration. But sometimes the reminders arrive the hard way.
One evening I rode the whole length of the Shunga Trail to Fairlawn Road and was headed back toward downtown. I was going at a good clip as I passed under Kansas Avenue and approached the rather sharp curve to the left the trail takes there. My thoughts were not on where I was or what I was doing. I was thinking about some errands I needed to do later, and the rest of my to-do list, as I took that curve.
In the space of a second my mind was yanked back to the present as I realized that: (a) I was not turning as much as I needed to, and (b) I was not going to clear the curve.  I managed to get my right hand off the handlebars just before they hit the metal railing on the outside of the curve. The impact threw me off the bike. My right leg hit the handlebars, now twisted parallel to my front wheel, as I went over.
I hit the concrete and slid a bit. As I sat up, my main concerns were my bike (obviously not rideable) and my left elbow (bleeding, but not too badly). Legs and feet were bruised, but clearly nothing was broken. I was just a couple miles from my office, so as soon as I got my breath back and dabbed at my elbow a bit, I walked my bike back downtown. 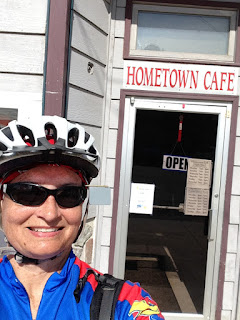 It wasn’t until I took my helmet off and saw the ragged scrape on the outer shell that I realized my wreck could have been worse—a lot worse. I was glad then of my habit of wearing my helmet on all bike rides, even short ones on a trail.  As it was, I was bruised up pretty bad and had to take a break from riding for a couple of weeks.
The bike shop fixed my bike and I bought a new helmet (necessary after a wreck, or every few years — whichever comes first).  I do try to stay in the moment as much as possible on rides. Being distracted while riding a bicycle, similar to being distracted while driving a car, is not likely to end well.


Lisa Rasor is a Litigation Paralegal in KDOT’s Office of Chief Counsel.