When it clicks: Seat belts save lives

It was a usual Wednesday morning on Sept. 15, 2010, and I was doing the daily duties of a KDOT inspector. The striping contractor was working on the project the day before, so a coworker and myself were measuring the striping for pavement. When we finished measuring the striping it was almost time for lunch, so we decided to head back to the construction lab. Just as we started back to the lab it started to drizzle. 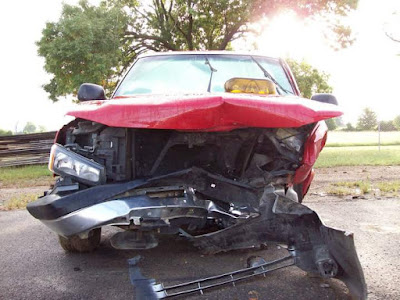 We were heading south on the U.S. 59 highway project south of Lawrence when we merged onto the shoo-fly lane that moved traffic around the construction. On the south end of the shoo-fly a northbound car crossed the double yellow line and hit our truck head on. The car took most of the force from the collision.
A total of three motorists were part of the accident, the driver of the Nissan Sentra who crossed the double yellow lines, my coworker and myself. The driver of the Sentra was transported to a Topeka hospital and then transferred to KU Medical Center. My co-worker and myself were very lucky that day and only received minor injuries. My coworker was transported to and released from Lawrence Memorial Hospital and I was transferred to KU Medical Center with a dislocated and fractured left mid-foot that put me out of work for six months.
Everyone involved was wearing seat belts, though everyone was injured, it could have been a lot worse. I always wore my seat belt before the crash and now after, it’s absolutely a necessity.
What seems to start out as any normal day may not end that way, as that Wednesday in September for me. I feel fortunate that I can tell my story and that my wife and kids still have their husband and father. Safety is the responsibility of every person on the roadways and is the one thing that keeps them from having a life-changing event.
The following is a quote from William M. Jeffers, former President of Union Pacific Railroad Co. (1946); “Safety applies with equal force to the individual, to the family, to the employer, to the state, the nation and to international affairs.  Safety, in its widest sense, concerns the happiness, contentment and freedom of mankind.
Dan Zirkle is an Engineering Technician Senior in KDOT’s Bureau of Construction and Materials.